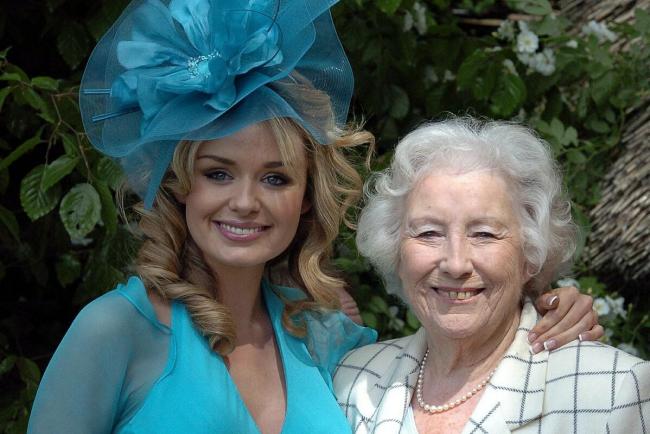 The magnificent Museum Real Bosco e Museo di Capodimonte opened June 9th with an informative Press Conference presented by the Director Sylvain Bellenger and attended by the My Country team. He welcomed the press outdoors within one of the sites courtyards and everyone wore masks. During the recent months of forced closure, the Museum continued working to produce various conferences online and the Farnese Collection has been reconstructed including a new lighting system. The Director Bellenger, together with Staff and various associations clearly expressed total passion and energy regarding the reopening presenting a promising array of future programmes.

The association Amici di Capodimonte Onlus presented the theatrical programme Il Teatro dei Burattini – of puppet shows (not only for children!) held within the Park Real Bosco – zona Belvedere – scheduled through June and on Saturdays 4th and 11th of July at 11.30 pm and 12.30 pm. Events are without charge but booking is necessary by contacting: info@amicidicapodimonte.org

Leave your full names and telephone numbers together with the desired time and date.

Future schedules involve a selection of street artists, Musicapodimonte musical events and Luglio Musicale Napoletano Neapolitan music tributes followed by outdoor Cinema screenings on show during September.
Capodimonte will also host over 30 fantastic events taking part in the latest thirteenth edition of the International Festival of Theatre – NTFI20 Napoli Teatro Festival Italia. This year’s Festival has scheduled over 130 events running from July 1st to July 31st to be held through Naples, Salerno and Santa Maria Capua Vetere. For details visit the website https://napoliteatrofestival.it/. Events will be held at Capodimonte (Courtyard from Porta Piccola entrance and at the Casino and Fagianeria entrance from Porta Miano) and 35 shows at the Royal Palace Palazzo Reale di Napoli (Courtyards and Garden). Each ticket purchased for events taking place throughout both sites will receive a free entrance ticket to visit the site – valid until August 31st 2020.

Sylvain Bellenger also reaffirmed that entrance to the Park Real Bosco will continue to be free of charge. The Park and Museum fully respects all anti-Covid-19 safety measures to ensure the well-being of all visitors including one-way circuits, regulated entrance with limited numbers and reservation online for tickets using https://coopculture.it/.

Santiago Calatrava was highlighted in our last February edition presenting the exhibition Nella Luce di Napoli.
The opening dates have now been extended to next January. The multi-talented Spanish artist (painter, architect, engineer) displays forty years of creativity with more than 400 works including sculptures, designs, ceramics and models of his most-famous architectural projects. Calatrava’s works also include the 2016 Oculus project created for the World Trade Center Transportation Hub and situated at the Ground Zero site of New York. He was also assigned the Golden Award by the AIA American Institute of Architects and held an exhibition at the New York Metropolitan Museum of Art.

The Royal Apartments boast 18 halls of which have become a unique setting and a multi-sensory journey placed in 18thcentury Napoli created by the artist Hubert le Gall. Each hall follows a different theme ranging from sacred music, politics and succession of dynasties, the Grand Tour, ironic wigs and to the art of embroidery and sewing including paintings, musical instruments, furnishings, more than 100 costumes and 500 porcelain artefacts.
Precious porcelains are staged together with intricate costumes taken directly from the dressmaker’s workshop of the theatre Teatro di San Carlo selected by Giusi Giustino.
The exhibition represents those fascinating times when the arts were considered as a celebration and splendour was a cornerstone of the new Bourbon reign.

The International Festival of Theatre NTFI was established back in 2007 and produces shows and events promoting Naples throughout the world. This year’s 13th edition programme involves over 130 events taking place throughout Naples and various regions including Salerno, Caserta, Benevento and Avellino.

The prestigious theatre Teatro San Carlo has scheduled a series of three fantastic concerts REGIONE LIRICA to be held on-stage in the magnificent Piazza del Plebiscito and transmitted in Eurovision.

Fondazione William Walton
The enchanted gardens Giardini La Mortella were created by Sir William Walton and Lady Susanna Walton. The original plan was designed around the suggestive volcanic promontory by the renowned British landscape architect Russell Page who worked together with Lady Walton during the 1950’s.
The botanic gardens are situated on the isle of Ischia, Naples boasting 2 hectares of rare plant and flower collections from the Mediterranean and over the world together with trees, ponds, streams, fountains, tropical greenhouses, Nymphaeum and William’s rock.
Sir William Walton was a British composer who arrived to Ischia shortly after marrying Susanna in 1949 when the land was purchased situated in an area known as “Le Mortelle” due to myrtle bushes present throughout volcanic rocks and so giving the name to the property “La Mortella”. Lady Walton worked over 50 years with dedication to create a refuge for William to compose in isolated peace. When William passed away in 1983 she decided to open the grounds to the public by 1991. She formed two foundations in his name – the Fondazione William Walton in Italy and the William Walton Trust in Britain, aiming not only to promote her husband’s love and knowledge of music but also to maintain the beautiful grounds and gardens. To Lady Susanna Walton, La Mortella has proven to be a mission of a lifetime, a monument to the life and works of William and a poignant reminder of the great love they experience together.

2020 OPENING TIMES
The Garden is open to the public from June 16th to October 31st, 2020. Open Tuesdays, Thursdays, Saturdays and Sundays from 10 am to 7 pm. Last admission by 6 pm.
At least two hours are recommended for the visit. The garden is also accessible to disabled visitors. Guided Tours for groups are available in Italian and English by appointment only +39 081 990118. All visitors receive a map of the gardens including a suggested itinerary and the main attractions. 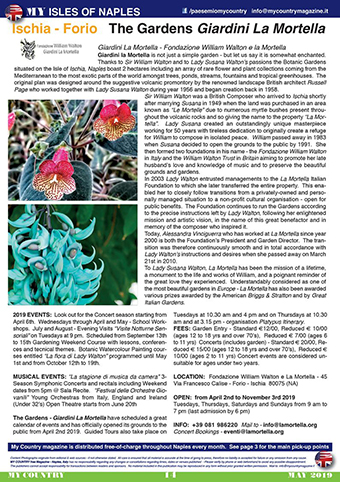 The latest Shuttle Bus service with two routes connecting the Vomero area of central Naples to Miseno and the Lucrino Cumana train station to Capo Miseno will be available until August 31st 2020.
EAV already offers different itineraries throughout the Phlegraean area called “Archeobus”.

Face Mask Regulations
The Campania region declared the obligatory use of protective face masks starting from April 10th 2020.
Well, after two long months these regulations are easing but regarding outdoor use only. In fact, masks are no longer obligatory (but optional) for outdoor use starting from June 22nd 2020. As for wherever social distancing of at least 1 metre proves impossible and for indoor use – such as public transport, shops, supermarkets etc., use will still be necessary until further notice.
Social distancing is still required. Stay Safe!

The epidemiologist Doc. Angelo D’Argenzio recently commented: “I believe as a technician that it would be preferable to continue to use protective face masks even without obligation, to maintain social distancing and avoid any gatherings. This is an appeal to each personal conscience and the respect for others. It will only be when the Campania region results with zero infections for at least two consecutive weeks that we can start the next phase, but cautiously. Cases are still registering throughout the world and so this situation must be faced until we create an effective vaccine. Our behaviour must change until then as Covid-19 has shown an extremely high contagious index and is fully capable of spreading rapidly. We must continue to be carefully aware“.

The regional president Vincenzo De Luca commented as he presented the latest ordinance: Even though it is no longer mandatory to wear masks on the streets caution will still be necessary however in all closed areas.
This does NOT mean we can “party” every day and that it’s all over… De Luca has in fact gained a great number of fans and social followers during these last few months – thanks to his critical, frequently comical but at the same time clearly annoyed comments duringthe Lockdown stage. De Luca was also frequently portrayed as a Superhero!
The Campania region is currently focusing on smart working and the resumption of normal working activities – obviously in compliance with all anti-Covid safety standards.
Changes are also on the way regarding contact/group sports but as for restrictions regarding the so-called “Movida – By Night” situation, the ordinance will be revised on June 30th.

Milo Manara is an artist that has frequently been highlighted by My Country magazine. His latest works are dedicated to “Lockdown Heroes” to produce charity funding to help hospitals situated in Naples, Milan and Padua. The project consisting of 25 illustrations designed by Manara was created in collaboration with Comicon (Comic Festival) and Feltrinelli Comics.

“I cannot say exactly how I started this series of watercolours,” commented Manara, “it was not at all programmed as I simply found myself drawing the first image. I remember the dismay and disbelief of the looming catastrophe that made it impossible to continue my routine work as I just couldn’t concentrate.
It was International Women’s Day – March 8th and I was trying to find an image for the occasion but the emergency news overlapped any inspiration. Doctors and Nurses were facing a virus that they knew nothing of, often without any adequate protection as the wards filled and intensive care facilities proved insufficient. It seemed quite natural after more than fifty years spent celebrating women’s beauty and seduction to also celebrate their other virtues. Together with all health workers many other people continued to work throughout the emergency stages exposing themselves to risk including supermarket cashiers, hospital cleaners, pharmacists and police and military forces amongst others. Giving tribute to women workers at a time like this isn’t just being kind but it means affirming life against death, hope against anguish, beauty against sadness and love against hatred.
Today, we need this even more than ever. I designed them one-by-one to simply thank them… or perhaps even hoping that we will remember them all when this is all over” …

LOCKDOWN HEROES will be on-sale in Bookshops from July 30th and is already available by pre-order.
Lafeltrinelli.it, Ibs.it, shop.comicon.it/milo-manara, Amazon.it, Hoepli.it, Webster.it