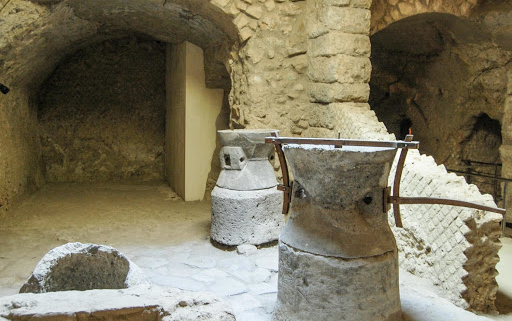 THE UNDERGROUND ARCHAEOLOGICAL ROUTE
Percorso Archeologico Rione Terra, Pozzuoli
1. THE ENTRANCE
2. THE SEA – The Port of Pozzuoli in Roman times with ships and goods on the waves
3. THE ANCIENT CITY – Including excavations allowing the reconstruction of the ancient city as it was
4. THE POZZUOLI FISH MARKET – The market’s ancient origins including Medieval cisterns
5. THE STRATIFICATIONS – The History of Rione Terra, its origins and building structures frequently transformed according to necessities. To be noted – the advanced
Spa’s and the areas Tiepidarium and Frigidarium
6. THE SATURNALIA CELEBRATION – One of the most popular religious celebrations originating from ancient Rome celebrated annually from December 17th to the 23rd to honour Saturn 7. THE GOODS – A typical representation within the original Granaries including suggestive audio effects 8. THE RUINS – An enchanting environment full of important archaeological discoveries including the head of Athena Lemnia and other statues – together with various revealing waste residues
9. THE PISTRINIUM – What may be considered as a bakery revealing how slaves transformed wheat to flour